Arrived safely back in Dallas two weeks ago from Iquitos, the headwaters of the Amazon and Pucallpa, in the Peruvian jungle. First – thank you for your prayers and support.  They were felt, needed and much appreciated. My heart has been deeply touched once again  and exciting opportunities await on a return trip planned for the end of 2010.

I met so many wonderful and special people along the way and was given a priceless opportunity to minister to many children and adults throughout the two weeks I was in Peru. It’s hard to know where to start except perhaps at the beginning.

The first week started in the large city of Iquitos, population 500,000. The only way to get to this city is by plane or via the Amazon. There are no roads connecting this city to any other! After full day of traveling I was excited to meet the team. There were 3 young men from Germany – Simon, Filip and Samuel, Pastor Marcos from Chiclayo, Peru and Ray Skaggs from Lima, Peru. A group from House of Prayer and Blessing in Iquitos (they have 7 satellite churches along the river) was also going on the Amazon with us including – Pastor Sandro and his family and Pastora Consuelo – dynamic woman!, and a group of young people who comprised the dance and drama group. A spectacular crew.

The first day we held a children’s program at an outdoor park-like area for a local church. As we walked into the area where we were going to hold the program there were hundreds of kids waiting – excited – filled with anticipation. It was so fantastic to see all of their smiling faces. I felt like a rock star or a celebrity.  But the feeling of “greatness” slipped away quickly as a few things went wrong from the start. The sound system failed and we had to go buy a new one quickly, the Max Lucado cartoon movie had to be started several times before it would play, it was so hot the crayons that we had put into the bags for the kids started to melt, there were swarms of mosquitoes we had to navigate through and deal with throughout the afternoon/evening and I fell through the makeshift stage! Yikes. Now that was embarrassing since I was in a long skirt. I still laugh as I recall how gracefully I went down! Fortunately I didn’t get hurt and there are no pictures!

The kids stood for hours at the bottom of the stage and watched and listened. At the end each one received a coloring book, crayons and a sandwich and drink. I watched as hundreds of kids filed through the lines to receive these items. And it amazed me as it did last year how there was always enough for every child even though at times it looked like we would run out of everything.

Our first program ended as a success, as did each subsequent one. Did you have any doubts even with the obstacles we faced? God was in control. And that was how it was the entire time. Obstacle after obstacle was put in our path and each one CONQUERED.

Until tomorrow when we head onto the Amazon river and the villages/pueblos along the way – enjoy the pictures. 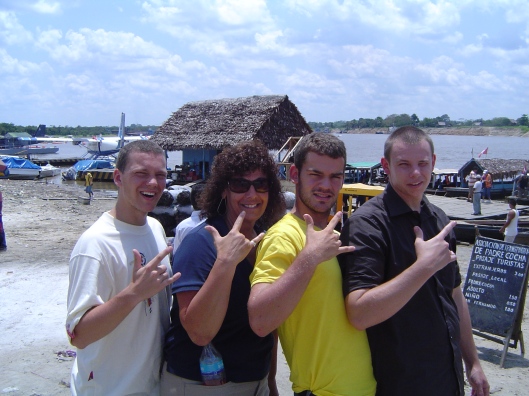 The young men from Germany – Filip, Simon and Samuel (taught them “I Love You” in sign language). They weren’t sure at first that I was teaching them a good hand sign! 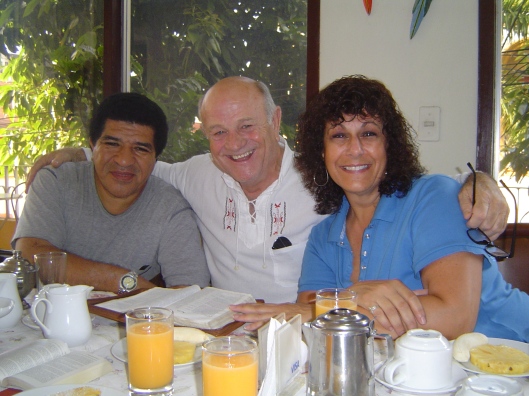 Pastor Marcos, Ray and I. And yes … that is a bible we have open on the table. 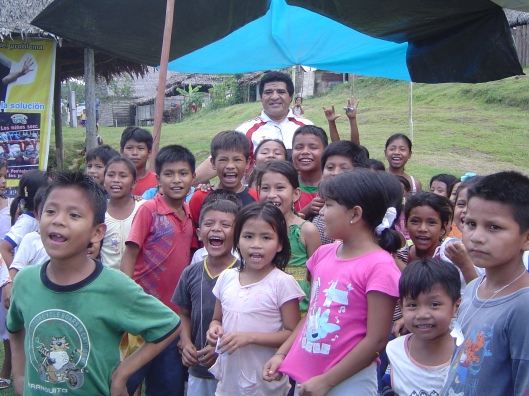 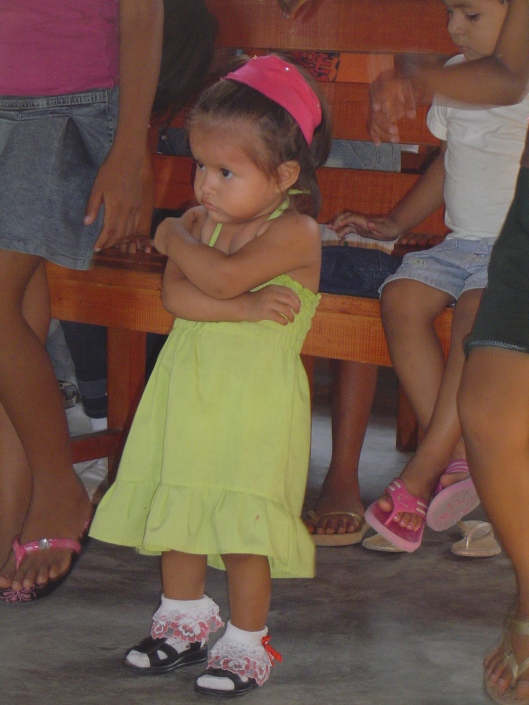 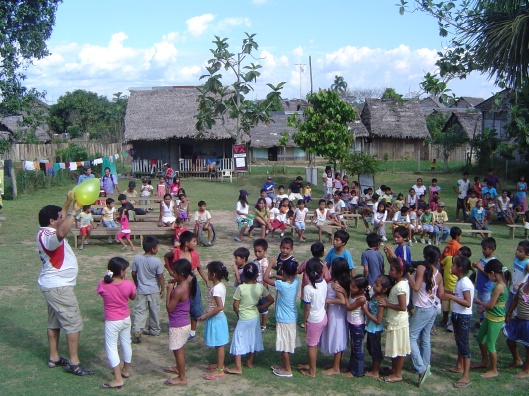 Overview of the first program venue

Playing with kids in His Mighty Grip,