The second pueblo on our journey along the Amazon was a village called Veinte Enero. Often they name the village by the date it was founded. And this one is no exception. Founded on January 20th, this pueblo was a great deal better off than most. Large brick/concrete school building, “updated” huts – perhaps just built a little better. “Updated” is a stretch. It is situated in the Amazon Park reserve system and because of that they have scientists and biologists that come to conduct research on the Amazon River and Jungle. For this reason they had accommodations for these people to stay and since they weren’t there at the time we got to use their facility. Yahoooooooooooooo – a bed complete with mosquito net, there were flushing toilets (although toilet paper was still at a premium as always) and even showers! Okay so only cold water but hey we would take what we could get. It felt like the Marriott – you can imagine after sleeping on wood and concrete floors with no mattress or flushing toilets and no showers this was a definite step up. Where was this place when we were sick the other day???

Pastor Omer is the head of the church in this village. A satellite church of the House of Prayer and Blessing out of Iquitos. The “satellite” pastors make only $30 per month for their position and trust me they do a huge amount of work.

Below is a picture of the Pastor and his family. His wife coordinated the women who cooked all of our meals. Our group ate in their “open-air dining area.”

They lived in a small hut with the kitchen and dining area behind them. Here is a picture of the dishwashing area (hmm – no hot water – sanitation a big issue especially with the poor water source – directly out of the Amazon!) and the long table where our group of 24 ate every meal. 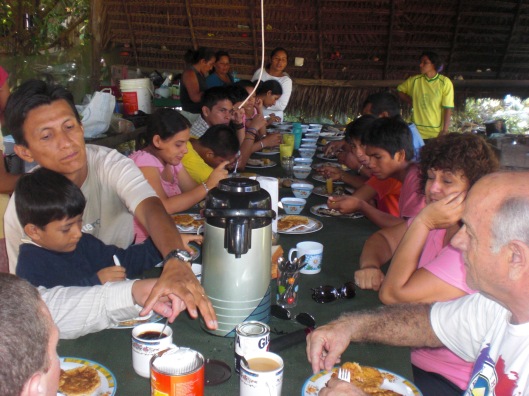 Our cooks were amazing, pictured next. They always waited on us and were there to get us whatever we needed. At times it felt awkward though – there was an order to eating. The guests, us, ate first, then the men of the family followed by the women and whatever was left was given to the children. It was like this wherever we went and I often felt bad for the kids so I’d try to give them something extra or extra treats.

We ate WELL here! The food is simple and basic and tasted sooooooo good. I actually find myself missing it now that I am back home. The flavors were interesting – especially the chicken – at least I think it was chicken! It tasted bland and was tough. Guess the chickens had their “pecking” order along with the kids and scratched out an existence. So if they ate junk off of the ground you can imagine they didn’t taste so good when they were cooked. Ewwww. Yet look at our faces – we enjoyed eating together no matter what we were fed. It was all good. 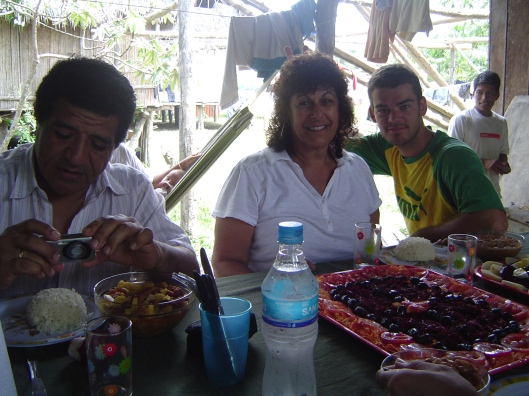 Pastor Marcos, me and Simon – another open air dining experience. Hey, people pay big money for this type of atmosphere.

I’ll leave you with this last set of pictures of a little boy eating (on the ground as they often did) only the birds were trying to get some of is lunch too!!! Enjoy – Buen Provecho – Good Eating. 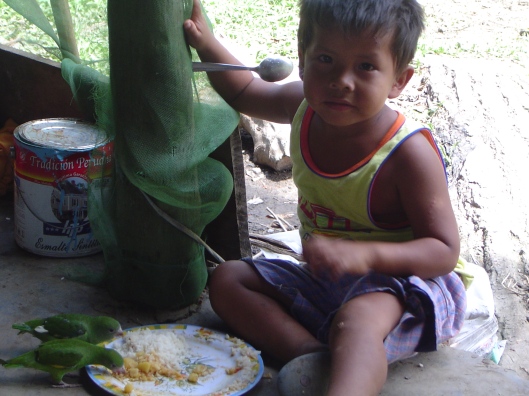 I LOVE THIS PCTURE – Check out the birds!

Lunch In His Mighty Grip,