As a realtor in Dallas, Texas I have the opportunity to see many, many homes. Homes that are elegant and expensive, huge homes with more square footage than I would know what to do with, homes that are decorated exquisitely and those that are smaller in square footage and yet are still absolutely spectcular. Homes with elaborate landscaping and homes with gorgeous pools and spas. But I have NEVER, NEVER, NEVER seen a home so breathtaking as the one that I helped to build in Pucallpa, Peru. I know I am jumping ahead and leaving out some of the stories from this last trip but quite frankly it has been so long since I have written – distractions that I let pull me off course – that I want to pick up at this point and then go back! Thanks for allowing me to do this!

The second part of this trip led Ray Skaggs and I to Pucallpa, Peru – a large city of 500,000 along the Amazon in North Eastern Peru. From here we would head out to the jungle to minster to the kids at the satellite churches that had grown out of the main one we had come to visit in Pucallpa. We landed at 11 pm and were greeted by several people from the church including Jennifer, a young woman who had gone to Pucallpa during college and ended up falling in love with the people and so she stayed! Twelve years later she still calls this home and is one of the pastors of this church. Once settled into the living quarters at the church Jennifer reviewed the itinerary for our trip to the jungle the next day. But before we would leave she had to check on a project. Of course I wanted to know what that involved – wanted to be included on everything – wanted to go with her. Isn’t that why we were there? To help? Wherever needed? Her plan was to leave around 5:30 am or so to help build a house for a parishoner. Okay well maybe I had to rethink the 5:30 am wake up call! And yet I begged Jennifer to let me go and help. After all I knew my way around a hammer, nails and saw!

Marie Luz had been saving for over a year and a half, saving to fulfill a dream to provide housing for herself and her two daughters. She woke up early each morning to walk 2 miles into town every day to work as a maid. Buying one board at a time, when she had saved enough money, she stored them at a neighbor’s house waiting for help to build on land that she had been sold for about $300 in a long drawn out homestead process.

5:30 am came very early in the morning. But the excitement was overpowering and the pre-dawn hour didn’t matter any longer. We were picked up in the common tri-ped motorcycles that barely hold two adults. There were 3 of us in this particular one plus food, water and tools! There were things sticking out and hanging off of this vehicle everywhere!  As we drove through the “subdivision,” along the heavily rutted, dusty dirt roads, the anticipation was building. I could barely contain my excitement! And then Jennifer pointed out the lot where we would be building. My heart fell so far down into my body I wasn’t sure I would be able to pull it back into place. Directly in front of us was a house made of plastic. You read it right. Assorted plastic of all sizes and colors. Whatever could be gathered and pieced together. The only wood to be found were the the four sticks that were pounded in the ground to which the plastic pieces were tied forming the “four walls” of the house. This is what I saw as we drove up to the lot………………..

That is what Mari Luz lived in during heavy rain, dusty days where you choke down dirt continually and hot and humid days where there is no relief.

With Mari Luz in front of her home!

She was so grateful and excited to start building her new home. She took me inside, well actually she pulled back a flap of plastic to show off the inside of her home. It measured, at best, 10 feet by 9 feet. Choking down tears and emotion that tried to rise up and swallow me I smiled and said I was honored for her to show it to me and humbled to be a part of building her new home. The floor was dirt – the mattress for her bed was tattered and torn, covered in dust, lots of fine dust. A few other items were there, but my eyes couldn’t focus to see what they were. There were just too many tears trying to flood out. I know though there was no other furniture. There wasn’t space for it nor room to stand. The center point of the house was about 4-1/2 to 5 ft tall. No refrigerator. Each days provisions, however minor they were, had to purchased as needed – no place to refrigerate or store food items. She cooked right outside the “door” with a “lean to” piece of corrugated steel that created a wind block for the fire that was built directly on the dirt. She told me that twice in the past 2 weeks as her food was simmering on the grate over the fire that dogs had knocked the pot over and eaten her dinner. And that was that – there was no other food to cook for the night so she went hungry.

Inside view of the house. Notice the holes in the plastic that not only allow much needed air to cross ventilate as best as can be expected but it also allows rain to flood in. Her mattress this day was 1/2 wet due to an earlier thunderstorm. 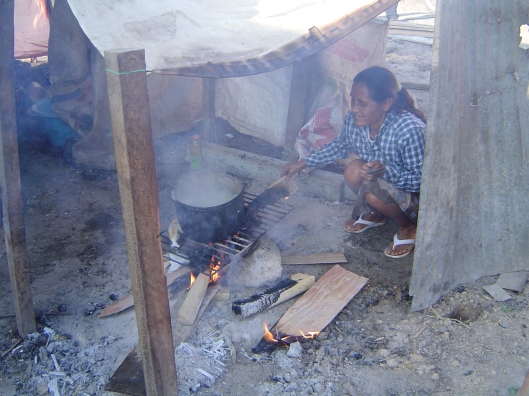 Campfire kitchen. The food that was prepared for us during breakfast and lunch was like a gourmet meal. Truly.

No lock on the plastic door so nothing could be left inside that could be taken. How does a person live like this? How do they exist? Well that’s it – they just exist. And they aren’t bitter – they love the Lord and have faith that He will provide. I thought about my house. Small by U.S. standards – 1700 square feet. Nothing spectacular, but a mansion compared to Marie Luz’s living conditions. Overpowering emotions flooded my heart. I knew then I would be back to build as many houses as I could raise money for in the upcoming months and years. I KNEW the purpose, the draw that God had placed on my heart for the people of Peru.

Next up … the story of the build, pictures of the progress and how it all came together in a short time. Many hands make light work.

In His continual Mighty Grip and loving it,