Recently I received an email from a co-worker, Denni, who told me that her sister-in-law had made over 600 bracelets for the kids in Peru! Even more surprising was how she found out about the project.  Months ago she read a Facebook post on Denni’s wall that Trinity’s Angels had written about the bracelets and how to make them. Tears of happiness came to my eyes as I realized that even though I don’t personally know her sister in law… there are people in this world with hearts of gold ready and willing to walk alongside and help where they can. Susan had read about the need and jumped in to help. You just never know who is watching or reading!! I will let Susan tell you about this endeavor in her own words below – and check out the sweet picture of their bracelet making “party.”

In His Mighty Grip,

“The attached picture is from our church retreat.  These are some of my faithful helpers, but not all that worked that day.  This picture has two Sarah Graces, Leah, Elise, Annabelle, and Grace.  The retreat has members from several churches, and I had helpers from each – I would say 12 – 15 kids total.  Some made one, and others made many!  We had to pack up every time before the meals since we were working in the dining hall.  I worked with three groups that day – some of the kids were there for all three sessions.  A lot of the kids were young 5-6 and up, but the youngest bracelet maker was 3!  She sat in the lap of an adult – choose every bead very carefully, and strung them herself!  She made 3 bracelets that way! I handed one little boy each bead, and he was thrilled to watch his bracelet grow.

When they first sat down at the table, they thought I was making bracelets just for fun, and they wanted to make them for themselves.  When I explained what I was doing them for, they each eagerly picked up the task, and told newcomers what we were doing.

I tied the knots on all the bracelets, and many times could not tie as quickly as they finished them. A friend of mine worked my kitchen shift for me so the kids could keep bracelet making.  It was a great opportunity to tell them about the children who would receive the bracelets, and sparked many wonderful conversations.  It was a great privilege to work with them, and 90 bracelets were completed that day.  The kids were so excited, and the kids in my church who helped ask me every week how many bracelets I have now.

Tonight the 4-H’ers at our County 4-H Christmas Party will be making bracelets as a community service project!

I’ve had friends scouring Michael’s in many locations to get the beads for me since the closest Michael’s is 75 miles from where I live in the boonies!  I think we cleaned out the supply in many stores.  : )

Will work to get the max made before the deadline…….

Happy to be serving in a small way, 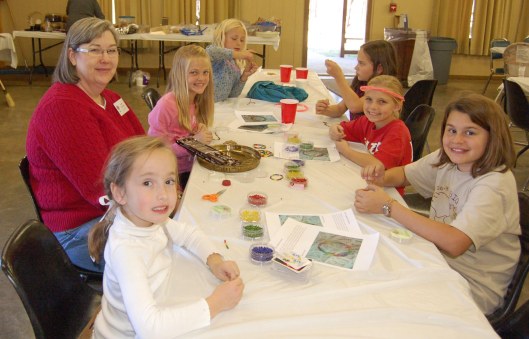 1 thought on “You never know who is watching….”