One afternoon, Pastora Mercedes asked us if we wanted to learn to ride a small motorcycle. They all know how to ride it and use it to get to the neighborhood store and places close by the church. Our response – “OF COURSE.”

So Mercedes gave me some instructions and showed me how to ride. 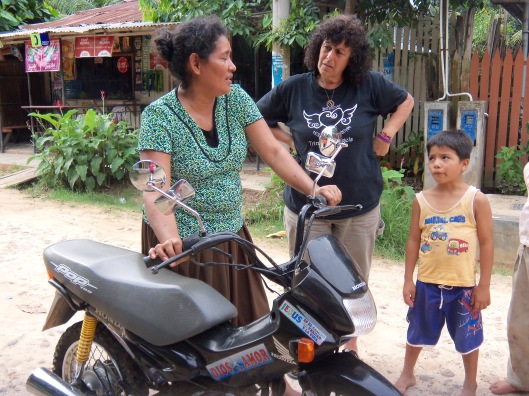 And off I went around the block several times with a couple of the neighborhood kids running alongside! Yikes. What a rush it was.

The last run I ran into roadblock after roadblock. The streets were filled with people playing futbol or volleyball. Dead end. So I found myself on a main road trying to get back to the church. I had a blast….

Then it was my turn to teach Cindy. Hmmmmmm. Either I didn”t teach her well or she misunderstood some directions. She set off to go around the block and it appeared that she picked it up quickly because it seemed like hours later when she finally returned.

She seemed okay. But…apparently as she turned the second corner, the bike slipped out from under her and landed on her. It took her awhile to get out from under the bike. She had a few scrapes. Well you can imagine that after that we left well enough alone and returned to building!

In His Mighty Grip and applying first aid !

1 thought on “Learning to ride a Motorcycle!”