My absolute favorite movie of all time is THe Wizard of Oz.  And…my favorite character, second only to the Wicked Witch of the West, is the Cowardly Lion. King of the Jungle and afraid of his own tail! Yet when he finds the courage – there is NOTHING he can’t accomplish. And the funny thing is that he had the courage inside of him all along. He just didn’t know it because he hit the wall of internal fear. The kind you slam into each time you take off on an adventure, a challenge, a dream. Push past it, past the fear and the people that tell you it isn’t feasible or can’t be done and keep pressing forward with determination. You too have the courage inside of you to fulfill your dreams, plans and purpose just like the cowardly lion!

Take a look at some of the people we’ve met along the way who walk in courage everyday. Some of them are living out their passion and others are just living – with the courage to make it through to another day despite their living and economic conditions.

Yanett – our liaison with La Sagrada Familia orphanage in Lima, Peru. Her contagious enthusiasm draws you in and her enormous heart for the kids knows no bounds. She has overflowing love for all off them and it is that passion that drives her and her mission to help clothe and feed these young children. 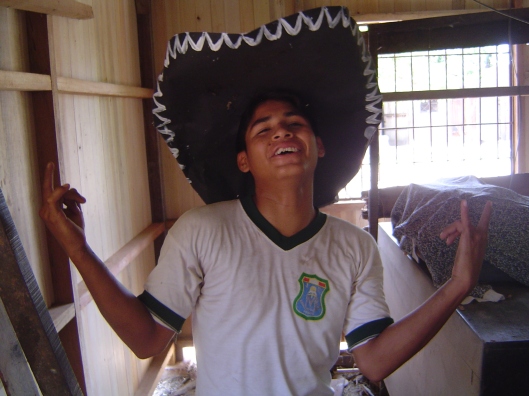 Paolo  – dances and entertains to the beat of a different drummer. He is a member of the dance troupe from Iquitos that performs in the kid’s programs in his hometown and along the Amazon River. Currently, he is working in Lima now earning money to pursue his calling and desire to be a youth minister.

Ninfa – Trinity’s Angels helped to repair/build her home so that she and her daughter would be able to live in better conditions away from the rotting wood, insects and chaos of her prior home. Now she is cooking and selling dinners in front of her house on tables with chairs for her “customers” to sit. It is breathtaking to see her shine and push forward earning her own money Where there seemed to be no way – there is hope and opportunity.

Juanita -this fiery woman has passion and love that overflows to all she meets. Her heart breaks for those less fortunate which are numerous in and around Lima, Peru. She prays continuously for everyone that crosses her path – a powerful intercessor. She speaks about The Word of God to everyone and the kingdom expands daily through her efforts. People are covered by her prayers.

Simon, Phillip and Samuel – these young men traveled from Germany to minister to children Peru and along the Amazon. They felt a continuous pull from the Lord calling them to reach people around the world. With little financial backing and a big dream and deep passion that moves them they now travel to foreign countries where they feel called working with kids around the world ministering to children and young adults.

Cynthia, on the left, is an 11 year old girl that given the opportunity will change her life and current living situation for the better and make a huge impression on the world. She has hope and is not afraid to voice those dreams that drive her. Whenever there was a worship service you could find her right in front singing her heart out to the Lord.

Pastor Jennifer of Luz Divina church. When she was in college she signed up for a 6 month stint to minister to the people of Peru. After the initial 6 month period was completed she signed up for another 6 months and then another and finally decided to stay for good and call Pucallpa, Peru her home. She is one of the pastors at Luz Divina, the church we partner with in Pucallpa. The congregation loves her and the feeling for her is mutual. She is SOLD OUT for Christ and living the plan He created for her with enthusiasm, compassion and love. A great example.

Oscar – this young man is studying to be a pastor. Not too many years ago he was living a tough life on the streets of Lima. Involved in drugs and other things he was invited to church and that was all it took to turn his life around and be on fire for the Lord. He captures the attention of children and his sermons speaks directly to their hearts. With his fun loving and outgoing personality he is making a huge difference expanding the Kingdom. Great things are happening because of his obedience to the calling on his heart.

Ray Skaggs – I simply have no words to explain the effect this man has had upon my life the last 4 years and the pull I feel for the people of Peru. He started Words of Life, a non-profit that we work alongside, and has been instrumental in introducing us to the people and places that need assistance. After several years of traveling back and forth to Peru, he decided to move there on pure faith knowing it is absolutely the place where God wants him to be. The call is so strong and the purpose so defined on his heart there is nothing that deters him. Nothing. He makes an impression daily on the people of Peru and everywhere he travels.

RISK IT FOR HIS GLORY. In His Grip…..risking……